Several years back, I was contracted with a local childcare program to write toddler lesson plans. In all my years of teaching, I had never worked in a toddler classroom. I raised my own toddler which helps, but I know it isn’t the same as managing 10 toddlers all at once. To prepare, I did some observations in the classroom and read up on toddler growth and development. I thought I would share with you a a brief overview of the lesson plans I developed and the format in which I gave it to the teachers. First I wanted to include important developmental areas that a toddler needs to develop during this stage of growth. I broke down the lesson plan into sections which included…

Often times the activities I created to promote these different developmental areas would overlap. One activity may actually promote several areas of development – for example using tongs to pick up toys in the sand table would promote both fine motor and sensory play. I based all themes around a concrete object or group of objects rather than abstract ideas. It was important to identify specific objects that would be meaningful and tangible to the child. For example, I wouldn’t include a theme about friendship because this is not a tangible concept. Instead, friendship is always being taught through daily interaction with the child. The themes I selected were to highlight more specific concepts or objects that the child could connect with verbally and physically.

Here are some of the themes I included…

The reason for choosing cute titles was two-fold. First, to keep teachers who would read the lesson plans thinking in terms of toddler age children. Second, so that when the lesson plan was sent out to parents or posted on a parent board, they too would view preschool for what it should be – fun and engaging.

I created my own lesson plan forms based on the developmental areas I wanted to make sure I covered throughout each week. Here is a partially completed sample of the lesson plan overview form… In each space of the form, I would write the title of the activity I planned to use each day. Then attached to each outline of the overall plan would be several pages of information describing the details of each activity highlighted on the overall plan.

Here are two examples of detailing the lesson plan: 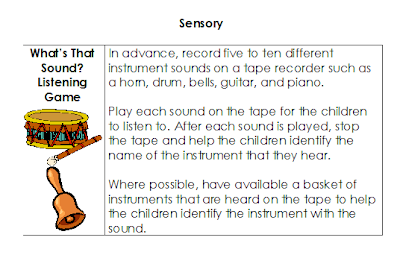 Daily Life Skills
I always included daily life skills such as washing hands in the sink or helping to sweep up the floor.

Music and Movement
I always included fingerplays or songs that children could move to and sing with.

Circle Time
Age appropriate books were suggested for each day. Many were read all week long and the term “circle time” was used more as a guide for the lesson plan form rather than a guide for how to present a book in the toddler classroom.

Nursery Rhymes
The school provided me with a wonderful collection of nursery rhyme puppets, CD’s and posters that were incorporated into the lesson plans. Teachers were encouraged to use at least one nursery rhyme each week.

What about the ABC’s and other basic concepts?
These concepts were introduced or reinforced through the various themes on a daily basis. Rather than having the children sit down and have a lesson on the color red, for example, the color red and the sound of the word red was used through casual interaction with the toddlers on a daily basis. A print rich environment where toddlers can explore these concepts was also part of the overall program.

This truly is a very brief overview of what goes in to developing a lesson plan, but it gives at least an idea of the potential that can be planned or provided for in a toddler classroom. Keep in mind that the classroom or learning environment itself is an extension and key aspect of any lesson plan. Sit up a little higher with a Kaboost Portable Chair Booster!

My grand daughter is at the age where she just does not want to sit in her high chair any more. This can be a little bit of a challenge since she isn’t quite tall enough to sit on her bottom in a chair and reach the table. So when you need a little lift, a Kaboost portable chair booster might just be the perfect solution. Baby game : up, up, up and dowwwwwwn

Exploring the concepts of up and down, in and out, with this fun little baby game! The first day in summer preschool

This two year old is exploring the new summertime classroom set up. Come and take a tour to see for yourself! DIY ramps and cars for toddlers

My grandson loves his cars and trucks so I thought I would introduce him to a simple version of ramps and cars this week. I started by making a simple toddler-sized ramp that he could easily explore. Looking for fun ways to celebrate Father’s Day? We have some wonderful ideas to share with you. Father’s Day will be here before we know Looking for fun and engaging books to grow your children’s book collection? We have just the books for you! Sammy children’s books from JD Educational What better way to make someone feel special than with a homemade gift? So, to make things simple, we have gathered some of our favorite